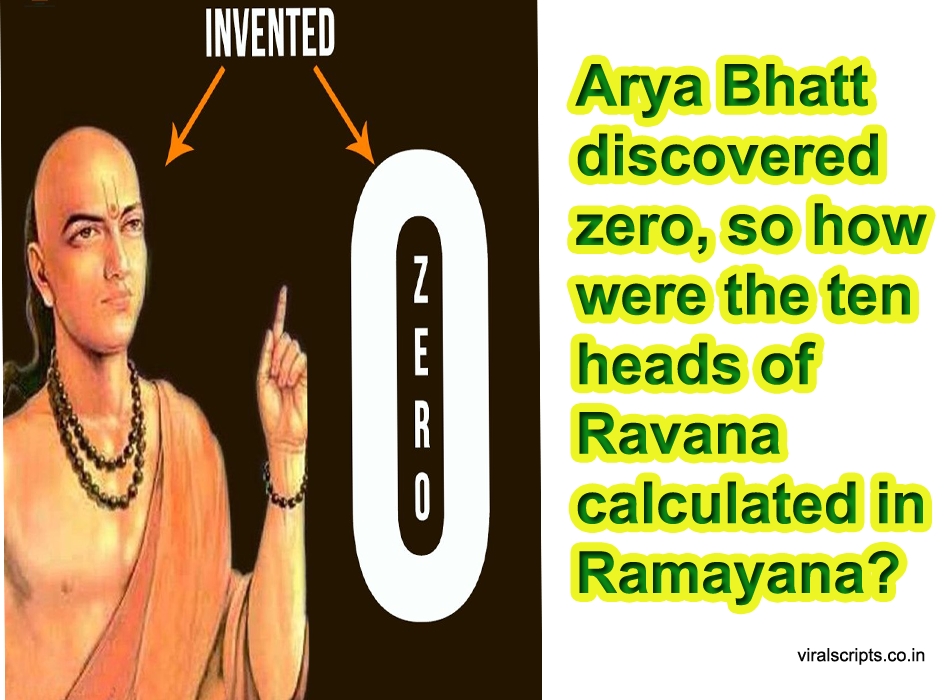 Arya Bhatt discovered zero, so how were the ten heads of Ravana calculated in Ramayana?

How can Ravana have ten heads, while the void was discovered by Aryabhata?

Some people question Hinduism and “Ramayana” to show Mahabharata “Gita” as fictional, that when Aryabhata discovered (zero/zero) in about 6th century, about 5000 thousand years before Aryabhatta’s discovery in Ramayana. How were the 10 heads of Ravana counted !!!

And how the number of 100 Kauravas was counted in Mahabharata !!

Whereas at that time people did not even know (Zero) !!

So how did people count the count!!!!

Now I am answering this question!!

Before Aryabhatta the world did not know 0 (zero) !!

Aryabhatta discovered (zero/zero) it is a truth!!

But Aryabhatta had discovered “0 (Zero)” in numbers, not in words, before that 0 (number) was called zero in words !!!

Even at that time, in Hindu religious texts like Shiva Purana, Skanda Purana etc., the sky has been called zero.

But in the period of Ramayana and Mahabharata, counting was not done in numbers but in words, and that too in Sanskrit.

That is, ten has come in the tenth, but the number of digits

0 (zero/zero) did not come, Ravana is called Dashanan !!

Now look, the ten heads of Ravana have been counted.

Similarly, during the Mahabharata period, the number of hundred Kauravas was described as “100” in the Sanskrit word.

Shat is a Sanskrit word,

Thus the number of Kauravas in the Mahabharata period became one hundred in counting !!

But even in this count 00 (double zero) of the digit did not come, and the count was also completed !!!

The number of Kauravas has been told in the Mahabharata scripture.

And we also took “Dash Padha”

Thus “0 (zero)” does not appear in the Roman word.

And you can also read “in Roman” from “one to one hundred”.

In earlier times, counting was written in words.

At that time there was no knowledge of numbers !!

Ten words have come in this !! But in this ten digits 0 (zero)” was not used.

Without coming 0, the count of lessons has become ten !!

(Anti-Hindu and atheist people just by their wrong reasoning)

Want to prove Hindu religion and Hindu scriptures as fictional !!)

By which by filling hatred towards Hindu religion in the mind of Hindus and by proving Hindu religion as imaginary, Hindu society should be converted into other religions !!!

But today’s Hindu society considers these people’s lies to be true because of not accepting their religious education.