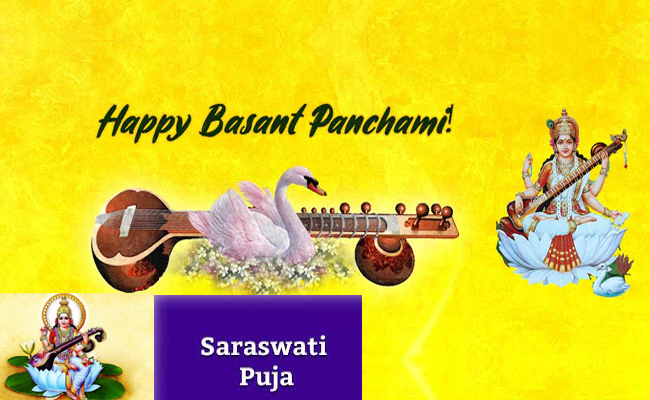 Some people also believe that, this festival is celebrated on the arrival of spring season, as at that time the crop is ready to ripen and people become happy and they express the same happiness. In the olden times, when goods were traded and agriculture was the only employment of man, since then the way of expressing happiness in this way was given the form of a festival. Because in Hindu religion, festivals are celebrated only in happiness or memories.

Out of the four seasons, spring is a special season, in which all birds, animals and humans experience a different season. Many people in the country like this season more.

Then Brahma ji saw that people are very sad and worried in the universe, so they made up their mind to make some changes in the universe. And he threw some water out of his lotus tank into the air and suddenly a goddess appeared.

The goddess had a Veena in her hand and Puranas in one hand. Brahma ji asked him to play Vinayab.

The goddess played a very good veena and with the sounds of her veena, there was a joy in the universe, birds started moving, animals were rejoiced by her sound and the sad heart of the people became happy.

And before this no one knew about music in the world, he gave a musical gift to the world, made people vaquan and that goddess taught knowledge to some of them sages and like a link, the propagation of learned and spread.

For this reason, Brahma ji was impressed and gave the name of Saraswati Devi to that goddess, who made the world Vakwan.
And since then till today this festival is celebrated in the worship of Mother Saraswati.

So friends, this was an interesting information about the festival of Basant Panchami, if you like this post, then definitely tell us your suggestion by commenting in the comment box..